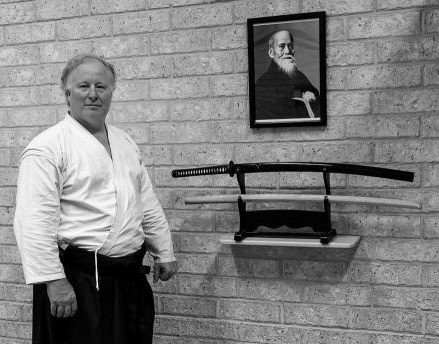 Sensei John Langley commenced Aikido in 1973 and currently holds the grade of 7th dan. He teaches regularly at the Perth, Bridgetown, Adelaide and Ballarat dojos, focusing on teaching the dan grades.

Each year since 2001, Sensei Langley has taught a five day winter school. From 2005, the annual Institute of Aikido winter school was extended to 5 days.

In 1971, John Langley became seriously ill from pneumonia, his weight plummeted from ten to five stone. He was very ill: unable to even walk because of muscle loss and lung damage. His mother looked after his health and well-being, and slowly helped John regain his strength. From 1972 onwards, John began to attack every level of fitness training that he could, including: mountaineering, swimming for the south of England, Rugby and the Duke of Edinborough’s Gold Award. By August 1973, he decided to set even higher goals to reach peak fitness; one of which was to study a martial art that would stimulate both the mind and the body. Having watched all of the martial arts that were then available, including karate, judo, jujitsu and takwondo, John chose aikido.

John joined the Slough Aikido Club, UK, which was part of the Institute of Aikido. He lived in Windsor, so each training session meant a ten-mile cycle trip to the dojo (in all weather conditions).

John’s first Senseis were Mr. David C. Timms (2nd Dan) and Mr. Ron James (3rd Dan). He trained three times a week at Slough and every day at home. At this point, the training consisted of jo, bo, bokken, kicking, punching and, of course, aikido.

After two years of training, Sensei Timms introduced John to the London Aikikai at ” The Hut” in Hillingdon whose Sensei was, Sensei Hayden W. Foster.

During the next 12 months, John trained five times a week at the London Aikikai and Slough Aikido Club dojos, including all of the sessions taught by Sensei Foster. He was invited as a 1st kyu to Monday night “closed door” training sessions for dan grades.

This was a great privilege, especially as after only a few months, Sensei Foster chose John to be his uke.

In the year that followed, he travelled to Scotland, Reading University, Cornwall (with Sensei Ron James) and to the Barry Summer School in Wales. During this period, he befriended Robert, Lawson and Fiona from Scotland and Eric, Freddy, Sam, Ron and others from Hillingdon.

At the end of three years of training and 12 months with Sensei Foster he was graded by Sensei Foster, Sensei Andy Allen and Sensei Hamish McFarlane and passed his shodan grading.

After attending another 12 months of sessions and another Barry Summer School, John emigrated to Australia, whilst Ron emigrated to New Zealand.

Sensei Unno taught Yoseikan budo. He held grades of 8th dan in Aikido, Karate, Iaijutsu, Kobudo, 4th dan Kenjutsu, 2nd dan Shorinji Kempo and Judo. His sensei was Kancho Minoru Mochizuki (10th dan, Meijin in Aikido), Yoseikan budo founder. Unno sensei lived next door to the Shizuoka dojo and began his training at an early age. On many occasions in Shizuko he was requested to uke for his Sensei and his famous guests during closed door sessions with O’sensei, Gozo Shioda, Kenji Tomiki and others.

On arrival to Perth, Western Australia, John immediately found a Japanese Sensei, Yoshiaki Unno, at his William Street dojo and also commenced training at the University of Western Australia (UWA) Aikido club. Over a period of years, Sensei Yoshiaki Unno taught John both aikido and his other martial arts which included Jo and bo-jutsu, iaido, Kenjutsu and also focussed on karate kicking and punching.

Rather than continue to train in the Yoseikan style of with UWA, John decided to start his own dojo, and contacted Sensei Foster for advice. After talking with Sensei Foster and Mrs Shirley Timms he received written correspondence from Mrs Timms and upon that, John formed The Institute of Aikido Australia in 1993.

The Institute of Aikido Australia

However, Sensei Foster’s style was so powerful that John developed his style in that direction and returned to Great Britain in 1996 to train with his Sensei once again.

John’s focus now, is to teach and maintain the original and effective style of O’Sensei Morihei Ueshiba.

As the opportunity arises, Sensei John travels around Australia to train with visiting Japanese senseis.

His focus is dominant on maintaining a martial art that is both soft and powerful combined with all techniques of aikido.