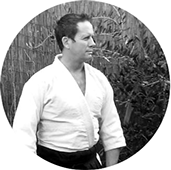 My background is ex-miliary and now project management

My journey with Aikido started in 2004 when I moved to Perth from Melbourne. (Before that I was in the military for a number of years, Australian Rules football, surfing, and serious boxing training for 3 years.) I had a friend who practiced it in Tasmania; he loved it so I sought out a dojo that suited me for keeping flexibility and social reasons. I the joined the IOAA Aikido dojo close in PCYC Subiaco run by John Langley and have trained under his tutelage ever since then.

In late 2011, with Sensei John’s OK, I set about opening a dojo with Sete Tele at Curtin University. I stayed there until January 2014 when I found a lease in a rundown East Perth warehouse. After 2-3 months of very hard work, with valued help from different ones, I got it into a state where we could open. Since then the dojo is steadily growing and I hope it continues that way as it is my passion.

My background is ex-miliary and now project management

Wing has been practicing aikido since 1993, having begun with Sensei Brett Nener at the University of Western Australia aikido club.

He joined the Institute of Aikido Australia at its inception when Sensei John Langley established the dojo at the Subiaco Police and Citizens Youth Club.

He has trained with Fredy Appeli on a regular basis. Wing regularly attends various seminars including Aikido Friendship Seminars and seminars held by Shihan Igarashi Kazou and Shihan Kobayashi Yasuo during their visits to Perth. 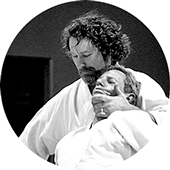 Was awarded his 5th dan black belt by the Institute of Aikido Australia in May 2014. Rob comes from a dance theatre and education background with 20 years experience teaching movement.

Early in his dance career Rob discovered Aikido when looking for a suitable martial art to inspire a dance show fused with the power of martial art movements. Commencing his Aikido training in 1997, he immediately fell in love with its power and flow and Aikido soon became his number one physical practice

Aikido and Dance share many common grounds such as the focus on posture and balance, being in harmony with the people around you and also the environment around you.

In order to learn Aikido one needs to work in harmony with a partner as a dancer would when learning partnering skills.  The focus of being grounded and ‘one with the universe’, as put by O’Sensei Morihie Ueshiba (Founder of Aikido) is something often talked about in the performing arts. 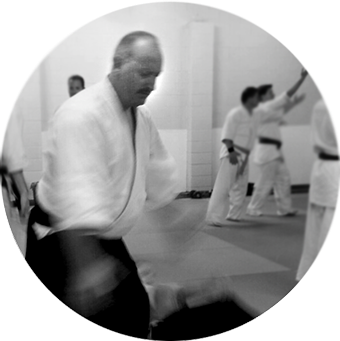 Mark has previously trained in Tae Kwan Do, Hapkido and Kickboxing.

Since beginning training with Sensei John Langley in 2008 Mark is planning to spend the rest of his training dedicated to Aikido.

Before joining the Institute of Aikido, Shaun trained in Kenjutsu and Shotokan karate.

Shaun has been practicing martial arts for 25 years.

He joined the Institute of Aikido Australia at its inception with Sensei John Langley in 1996.

Prior to Aikido, Shaun trained in Shotokan Karate, Kenjustsu, under Sensei Morozumi and Yoseikan Budo under Yoshiaki Unno Sensei.